Some people claim that aliens must have helped our ancient ancestors build the great pyramids of Egypt since we can’t figure out how they could possibly have lifted blocks of stone weighing up to 30 tons. If we can’t do it, they reason, aliens must have done it. But why would an advanced alien civilization agree to build gigantic stone monuments for the pharaohs? What was in it for them?

Let’s assume that an alien spacecraft really did visit the ancient Egyptians and its passengers were worshiped as gods. If they were to help build the pyramids, they would have had to meet with the pharaoh and his assistants to discuss the project and coordinate their efforts. Gods don’t usually discuss design plans, as far as I know, but let’s just say they did. The pharaoh would have been a fool if he didn’t make sure he had a design he could be proud of and could complete the project within his lifetime. Presumably, there would have been a lot of groveling and worshiping and Pharaoh would have had to promise something in return for the help. Maybe he would dedicate the structures to them. But this doesn’t appear to be the case. While there are hieroglyphs with stories about the gods, there is nothing specific enough to indicate that they made a major contribution to the project.

What else might some aliens want in return? Sacrifices? I think it is doubtful they would have enjoyed such a brutal, primitive ritual. People to experiment on? Again, I’m sure they could picked up as many human or animal subjects as they would have needed without the assistance of the locals. Food? Again, no need to do that much work for some moldy bread or bacteria-contaminated animal flesh.

Recent archaeological accounts indicate that a community of thousands of workers, not slaves, lived on the pyramid construction sites and were used to build the pyramids, so if aliens really did help, they obviously didn’t do all the work. Maybe they only did the heavy lifting, while the Egyptians did the design, excavation and polishing of stones, and various other details. If this is the case, then the aliens would have probably been nothing more than a contractor whose duty it was to lift heavy stones and move them into place under the direction of human architects. One would assume they could have used their technology to help with excavating and polishing, but then what would have been left for the thousands of workers to do? No, at the very most, they must have taken a more limited role or there would have been no need for an army of workers laboring for decades.

But if the alien role was that limited, then why would they even agree to do it in the first place? It’s hard enough to get one human contractor to come to your house to do one small project, never mind getting interstellar travelers to stop by for 10 minutes of work, even if it is fun to see thousands of locals watch in amazement and then fall to their knees in worship. 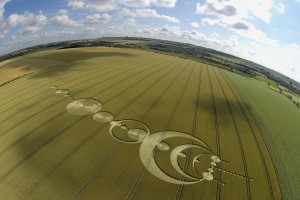 Why not at least ask them to spend a few minutes using their high-powered energy beams to carve exquisite patterns into the stone, like the crop circles of the past few decades? Would that have been too much to ask, or did these aliens take no pride in their work? Were they just lazy? Granted, the pyramids are accurate to within a couple of inches in length per side, but is that really the most impressive thing we could expect from an advanced interstellar civilization? I don’t think so.

After reviewing the available evidence and assessing the likelihood of alien assistance, I’m left with only one conclusion, even though it may be impossible to believe. Perhaps our ancestors really did figure out how to do some things that we still can’t! I know it sounds even more ludicrous than alien help, but what can I say? The latest evidence suggests that paid workers, not slaves, built the pyramids and that there were only 5,000-10,000 of them. There are plenty of theories about how they were built, but no consensus yet. Current attempts to demonstrate lifting and construction techniques show no completely convincing methods for how 30-ton blocks could have been lifted and placed using standard human or mechanical means. One theory even suggests that they were 90% built from rubble, not from solid blocks, which certainly would have been much easier. 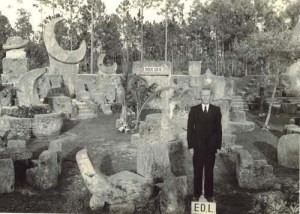 If we were to stick enough engineers in the desert with nothing else to do and nothing but sticks, stones, and human labor, I suspect they would eventually figure something out. Could it be that Edward Leedskalnin, the sole builder of the 1100-ton Coral Castle, in Florida, was right about how the ancient Egyptians built the pyramids and managed to move huge stones all by himself? Unfortunately, he took the secret with him to the grave in 1951, before anybody could convince him to give it up. Anybody else want to give it a shot?