GoPro Inc. is scheduled to release its quarterly results today after market close. Analyst estimates still don’t make sense to me. If you add up the projected revenue numbers for the first two quarters of this year, which I even think are low, and subtract them from the annual revenue estimate, GoPro would have to fall flat on its face during the Christmas quarter to only deliver $1.73B in earnings for 2015. We will find out after 5PM today how GoPro fared in the first quarter. I’m betting on an upside move. Short seller interest is incredibly high at over 61% of the floated shares. If they are right, the stock will crash tomorrow. If they are wrong, it will soar upward as they all rush to cover their short positions. Go to my previous Beat a Hero post to see the full details.

GoPro previously stated its intention to produce drones as a way of expanding its product offering. Wall Street pretty much ridiculed that notion, which does sound like a bit of a stretch for an action camera maker. But drones are going to be big business, so it makes sense as a way to expand their market. But if I were CEO Nick Woodman, I would take the easiest and fastest route to market by buying an up and coming drone maker. Like maybe 3D Robotics. 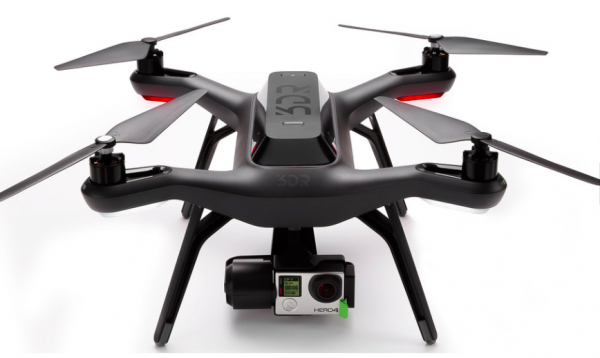 3D Robotics is a small private start-up company with $99M in venture capital funding. It offers an outstanding open-source autopilot system and control app that anyone can use or customize. It is also about to release the Solo drone, which has a GoPro compatible camera mount that has exclusive direct access to the GoPro camera settings via a connector on the back. Thanks their partnership with GoPro, drone pilots can now remotely control, recharge, and use their GoPros to stream live video up to a half mile via Wifi right to their phones. GoPro is also offering a professional-grade $7,500 HeroCast live video streaming transmitter.

Why, I wonder, would GoPro offer all this exclusive access to a small start-up drone company instead of keeping the technology to itself? For one thing, it makes sense to license their technology to as many drone manufacturers as possible to promote the use of GoPro cameras. It would be even better to make an exclusive deal with a company that can make the drones for you. So, what’s up with 3D Robotics? Is GoPro going to acquire the company using a fraction of its $6B stock valuation? Or did they make a sweet deal to jump-start their drone manufacturing aspirations? I’m betting that Nick Woodman is going to make the smart move and get into the drone business fast. Whatever deal may be in the works with 3D Robotics makes a lot of sense.

Slam dunk! GoPro results came in as I expected, wildly beating analyst expectations, and the stock soared immediately. Quarterly revenue was $363.1M, up 54% year over year. My estimate was for roughly $364 million, up about 55%. This time, management raised estimates for the next quarter to $380-400M, which is even above my rough projection of $378M and the $334M Wall Street projections. Way to go, pros!

1 thought on “Go Time for GoPro”