My Kid is My Favorite Player

Daddy Ball is what many call youth sports where the coaches are also the fathers of one or more of the kids on the team. It is usually described with derision because the coach or coaches are usually claimed or assumed to be playing favorites with their own child. I have a child on a baseball team with five daddy coaches, so as you might imagine, that leads to some pretty awful dynamics. However, it is hard to know who is right or wrong about the decisions being made on the field. Who’s daddy is playing favorites and whose daddy is simply living in fantasyland?

There are several possible situations we need to consider:

You might think that a coach is giving preferential treatment to his own kid, but the reality might be that his kid really is the best or he is delusional or simply incompetent. Say it isn’t so! Yes, I think it is more than likely that the coaches have no idea what they are doing, but then again, you probably don’t either. Youth sports coaches are usually not experienced players or coaches and have never had to prove themselves by developing a winning team. Even if they are former players or coaches, there is plenty of mediocrity out there and they have a huge self interest that they have to overcome. Chances are, they may be trying to be fair, but are deluding themselves or are simply mediocre at their job. 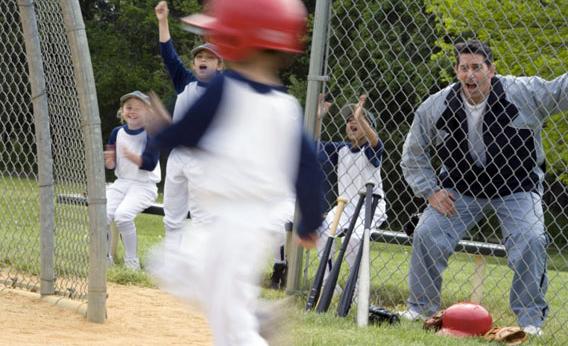 I’ve come up with one way to figure out the answer as to whether or not you are on a real Daddy Ball team, and it is based on what I call the Daddy Baller’s Dilemma.

Most business school students have heard of the book “The Innovator’s Dilemma” by Clayton Christensen. The Economist magazine named it as one of the six most important business books ever written. The  basic idea is that successful companies put too much emphasis on customers’ current needs, and fail to adopt new technology or business models that will meet their customers’ unstated or future needs. They also avoid new technologies or models that will disrupt their current market position. He argues that such companies will eventually fall behind because disruptive innovators will eventually eat into their market and marginalize their business. 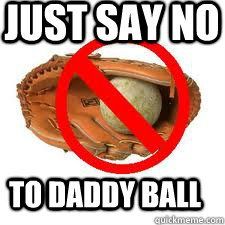 Just Say No to Daddy Ball

What does business have to do with daddy ball? Both business and sports are competitive activities that require smart decisions. However, business and sports leaders both have conflicting interests. Coaches who play favorites with kids who are not the best on the team are making decisions based on their own current self interest, but will eventually pay the price because the team will fail to excel. It will start to fall behind in competition with teams that do not play daddy ball. If a team has coaches with the best kids on the team and they know it, and they are able to evaluate and play talent well, they have a great chance of developing a winning team. Teams at the top of the league are probably in this situation, or they have paid, and thus relatively impartial, coaches.

If a team has coaches whose kids who are not very good, or they are incompetent when it comes to choosing and playing other kids, it is likely that the one of the following will happen.

The Daddy Baller’s dilemma is that he can only start to win by attracting other stronger players and placing them in positions in which they can be most successful. However, this is not in the coaches’ own self interest because it will undermine their own kids, who want to play in the “best” positions, get the most playing time, and hit first. Not only are their kids less talented, but they don’t have to compete for the best positions, so they never have to work to improve. So, while Daddy Ball coaches want to win, they are unable or unwilling to field a winning team and will eventually start losing. Rather than looking bad, they will drop down into lower divisions where the competition is weaker and they can look better.

My thesis is that, if the coaches kids are not the best on the team, your team is not improving year after year, is losing good players, and is dropping down in terms of competition, then there is a strong chance you play for a team where the coaches play Daddy Ball. Or, the coaches are simply incompetent. Get out before it is too late! But if your team is doing well or nobody else will take your kid, consider the possibility that you are simply delusional and your kid isn’t as good as you think!