I think I can evolve….

The theory of evolution, as formulated by Charles Darwin, proposes that creatures evolve through random mutation and that the subsequent competition among and within species results in the survival of those with the most successful characteristics. There is strong evidence that random mutation occurs and that competition leads to survival of the fittest. But is this theory a complete explanation for the process of evolution, or just one major part? 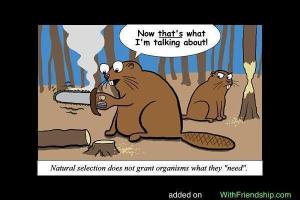 I knew I could evolve!

Darwin’s evidence is compelling, but it does not exclude the possibility of other biological mechanisms at work. We cannot, for instance, prove that all mutation is random. In fact, there is reason to believe that some genetic changes may be induced by organisms themselves in response to changes in the environment. This needs to be studied in a rigorous scientific way. The hypothesis would be that non-random evolutionary mutations occur when an organism is subjected to different environmental conditions. We may further hypothesize that mutations can be induced by either changes in the physical environment and the mental, hormonal or other states of the organism.

Deeply religious people who deny the scientific validity of evolution prefer to believe that there is a superior intelligence directing all biological changes. They claim to have a scientific basis for their theories about an intelligent designer, but really have nothing more than a belief in god and their resultant doubts about evolution. But what if organisms actually have the inherent capability to influence their own design? Could it be that our DNA can be easily altered when necessary? Can the microorganisms living within us adapt by prompting changes within our own DNA? Humans are just not singular organisms, we are a microbiome comprised mostly of bacteria and other organisms, including more than 10 times as many bacteria cells as human cells.

A complex organism such as a human might require many generations over an extremely long period of time to adapt to an environmental change through random mutation. But what if we don’t have very long to adapt or die in a crisis? The organisms within our bodies are short-lived and therefore can adapt much more quickly. What if we rely on these organisms to speed up own own adaptation? If these organisms can adapt quickly to our body’s changing internal environment, which is affected by our external environment, and respond by manipulating our bodies, doesn’t that mean that genetic changes can be driven by environmental changes as perceived through our senses of touch, taste, smell, sound and sight? Are changes activated subconsciously or in reaction to conscious mental perceptions of environmental changes or simply due to the influence of our microbiome?

In March 2005, a Perdue University study revealed that Arabidopsis plants, a member of the mustard family that is a favorite experimental subject, can correct defective genes inherited from their parents. Although both parents had mutated versions of a particular gene, they discovered that ten percent of the children had somehow repaired the mutant gene using ancestral DNA. This accidental discovery showed that there is another way that genetic information can be inherited that was previously unknown. These plants, in effect, were able to reverse the process of mutation through use of a “backup” copy of older DNA. We need to understand the conditions under which evolutionary mutations can be reversed. Was this a random event or a reactive response to a bad mutation induced by the organism itself? This ability to reverse the evolutionary process may be infrequent and does not invalidate the theory of evolution, but it should lead to a refinement of the theory.

Is there secret information in our DNA? We know that our DNA is like an incredibly detailed blueprint for the creation and operation of our bodies. It contains instructions for when to activate and when to turn off certain genes. Maybe it also contains information on how our genes can be modified to better enable us to adapt to environmental changes. If adaptability is such an important trait, why wouldn’t it make sense for an organism to gain an advantage by building in the capability to adapt through deliberate mutation instead of just random mutation? We may not be chameleons able to change our color at will, but maybe, given enough stimulus over a long period of time, we can slowly change our eye color, our skin color, our hair color, and many other aspects of our bodies rather than wait for a random mutation to do the job for us.

Not your average bear

A further step would be to examine the ability of an organism to induce mutations mentally. Such a study would replace changes to environmental conditions with the mental perception of a particular event. The event could be something that clearly benefits an organism with advantageous characteristics and punishes those with disadvantageous ones. The ability of simple organisms to perceive and react to threats to their survival might make such a study possible. However, the threats would have to be perceived rather than real and there would have to be a set of advantageous and disadvantageous responses to that threat that would affect the genetic makeup of their offspring.

The ability of organisms to perceive threats is well known. A mysterious case of exploding toads caught the attention of journalists in 2005. It turns out that in a particular part of Germany, birds had learned that toads had tasty livers and had learned how to swoop down and pluck them out. The toads responded to this increased threat by puffing up their chests so much that they started exploding by the thousands. I wonder if this case of widespread fear will induce a genetic change that increases the ability of toad offspring to puff up their chests or to protect them in some other way instead of relying on natural selection to weed out the bad genes.

Some believe that spiritual or energy healers can cure physical conditions in our bodies. If this is true, can this same process be used to induce permanent changes in our genes? Since a sophisticated study of the ability to mentally induce mutations may require the ability to perceive and understand current events or to anticipate future events, it may be necessary to limit participation to the most intelligent animals or human subjects. The placebo effect is well known and taken into account in all medical studies to ensure that the effect of new drugs can be established separately from the mentally-induced effect upon people who believe they are taking a new drug. Perhaps a similar methodology can be developed to measure the ability of people to induce mutations in their own DNA.

For example, a controlled study could be established that purports to be testing out a new drug designed to cure an inheritable condition. The cure for the condition would have to clearly require changes to a well-known gene. A successful study would require that couples take the placebo before conceiving children and subsequently have children who exhibit the needed changes to that gene. The probability that such mutations could have occurred randomly would have to be statistically insignificant. Unfortunately, the ability of humans to induce specific genetic changes may be extremely rare, so the chance of success in such a study may be extremely low if it does not have a huge sample population.

There may be other ways to test the ability of people to mentally influence the functioning of their bodies that do not require actual genetic changes. The survival of the fittest rewards characteristics that promote the continuation of the species, so experiments that involve reproduction are important. Anecdotal evidence seems to indicate that human couples have more babies after men return from a war than they would otherwise have had in more normal circumstances. While the variables in this situation are many (e.g. the amount of sex and the effects of long periods of abstinence, restricted diet, and extreme physical and mental exertion) it leads me to ask another question. Are military couples more likely to conceive prior to a deployment for war than they would if they did not anticipate such a deployment? If so, the factors that influence the answer should be limited to the effects of mental anticipation and the number of times they have sex.

There is also anecdotal evidence of people being unable to conceive a child when under extreme stress but able to do so as soon as that stress is relieved. It would be useful to study this and determine if humans have the capacity to suppress the functioning of their own reproductive system through the release of hormones or some other mechanism. If so, it will provide additional support to the theory that a variety of physical changes can be induced mentally and can perhaps even be made permanent through changes to inheritable genes.

I can’t say I’ve seen compelling evidence that changes in DNA can be deliberate as well as random, but I suspect this is because nobody is looking. Scientists usually have no interest in challenging a well-accepted theory, and they are even less likely to do so when the only ones challenging it are non-scientific types like the Intelligent Design crowd. No respectable scientist would want to be caught dead on their side. So, who is willing to take a new, fresh, look at the theory of evolution to refine and build upon it? Sir Isaac Newton wasn’t wrong about classical mechanics, but Albert Einstein corrected his work with his theories of relativity. Who is willing to build on the work of Charles Darwin? It has been long enough. The time has come.

UPDATE: Pressure from scientists to update the theory of evolution beyond what Darwin proposed has been growing. Also see this book: What Darwin Didn’t Know.